Here at SPD Ltd we like to make things as simple as possible, so have made a flow diagram that will guide you through a couple of key questions to determine which device you need. This is an excellent reference tool that you can take on site with you so it’s to hand when you need it. Please find below a link to a PDF file with some common FAQ’s on. Please feel free to print this out for display.

This year we are exhibiting at all the ELEX Exhibitions all over the country. Here are a list of dates…

Recently introduced standards put equal importance on protecting the electrical installation and electrical equipment as well as the building itself. This focus is because modern electronic components are very small and sensitive to over-voltages. As technology increases, consumer’s demand that the electrical items we use get smaller, which means the components inside are also smaller. The reduction in the size of these components over the years now makes electronic equipment so sensitive to over-voltages. An over-voltage, or a surge as they are generally called are short spikes in voltage, which unknown to most people are occurring all the time. As the components inside the electrical equipment we use are so small they are slowly degraded by these surges, which gradually shorten the lifespan of the equipment. This phenomenon affects everything that is plugged in to power, from your household electronics through to industrial machinery and computers. Many computer systems are now networked and they rely on each other to operate. If one part of the system gets damaged due to lightning or surges, the whole system will not operate. The consequential losses suffered during such events i.e. downtime and lost production, can be very high.

The Type 1+2+3 combined lightning and surge device is usually fitted in a separate enclosure and mounted next to the main board. They are wired in parallel to the supply, and can either be fed directly from an existing breaker in the board, or you can install connection blocks off the main board and wire the device into these connection blocks. If the building has sub-distribution boards more than 10 metres away from the incoming panel, these boards will require additional protection. A Type 2 device is usually sufficient here, unless the panels / sub-distribution boards feed external circuits such as car park lighting, CCTV etc. then these should have a combined Type 1+2+3 device fitted as standard.

In all other installations, where the building does not have an external lightning protection system and is fed by underground cable then a Type 2 surge arrester is sufficient. This Type 2 device can sit on the main board, where it will protect all outgoing circuits. If there are any sub-distribution boards 10 metres away from the main board then these will also need protecting with a Type 2 device. The reason for this is because surges can occur from anywhere in a building. Usually we think about the surges coming in from the mains, but generally this is not the case. Only about 20% of surges occur from outside the building. Whereas 80% of surges are generated from within the building, due to things like switching events.

Surge Protection is required to be installed under the 18th edition guidelines from January 2019. This is because the surges that have always occurred in our systems now pose a threat due to the increasing use of more sophisticated electrical equipment. As you can imagine, the equipment we use everyday is getting more technical, but also smaller. Which means that the components inside are getting smaller, so more susceptible to damage from any over voltage. The 18th edition states the only instance surge protection may not be installed in a domestic situation is if the value of the surge protection device exceeds the value of the electrical installation or a risk assessment has been carried out to prove the property does not require protection.

Most modern and the latest designed Type 1+2+3 combined lightning and surge arresters will have common and differential mode protection (all mode arresters). This means that these new devices protect not only from phase to earth and neutral to earth, but also phase to neutral and phase to phase. The advantage of an all mode arrester is a very low let through voltage between all conductors, less than 600V. A device of this type will be able to handle direct lightning currents as well as protect sensitive electronic equipment from damages up to 10 metres away.

Type 2 devices commonly referred to as surge arresters are generally fitted at the sub-distribution board position. They take out of the system internal surges from switching events, which can damage sensitive electronic equipment. Any sub-distribution board more then 10 metres away from the arrester at the main incoming position should have a Type 2 device fitted. They have visual indication of status and should be checked regularly to see if they remain active.

Type 3 arresters are generally fitted to stand alone pieces of end equipment fed from sockets but not exclusively e.g. a fire alarm panel more than 10 metres away from a sub-distribution board, which has a Type 2 surge protection device fitted.

If you have been keeping an eye on our Facebook page recently, you will have seen we did a interesting fact a day for 10 days. All the 10 facts can be found here within this post.

Fact One… The Speed of Lightning When lightning strikes sand or sandy soil, it fuses together the grains to create a small glass-like tube known as fulgurite. They are not only prized by collectors, they are also of great scientific value in demonstrating past occurrence of lightning storms.

Fact Three… The most lightning-struck location in the world

Recent research from the Met Office revealed that helicopters can cause an isolated lightning strike. While flying, the helicopter acquires a negative charge, so if it flies close to an area that is positively charged (e.g. hail or the base of a cumulonimbus cloud) it can trigger a lightning strike. Lightning is one of nature’s most recurrent and common spectacles. Around the world, there are over 3,000,000 flashes every day. That’s around 44 strikes every second. Trees can often be destroyed by lightning strikes. When lightning hits a tree, it usually travels just below the tree’s bark where there is a layer of sap and water. This layer becomes instantly heated and expands causing the bark to be blasted off the tree and sometimes splitting the wood. Fact 7… It can help plants grow

While nitrogen is in the air all around us, for plants to be able to absorb it (a process vital for their growth) they rely on a process called Nitrogen fixation. Although much of this process is done by bacteria and algae, the extreme heat of a lightning strike causes nitrogen to bond with oxygen to create nitrogen oxides which combine with moisture in the air to fall as rain and water plants with nitrate-rich water. To tell how far away a thunderstorm is, simply count the number of seconds between the flash of lightning and the boom of thunder that follows. Divide this number by five and this tells you how many miles away you are from the storm (or divide by three for the distance in kilometres).

Did you know, until the late 18th century it was believed that ringing church bells repelled lightning so many church bells bore the inscription fulgura frango, meaning ‘I chase lightning’.

During a thunderstorm, bell ringers would run to the bell tower to ring the bells. However, a high tower with a metal bell was in fact about the worst place to be.

Between 1753 and 1786 in France, 103 bell-ringers were struck by lightning and killed, resulting in the custom being banned.

We hope you enjoyed the fun facts about Lightning. Watch out for more information coming soon to our Facebook page and on our website.

These facts are available from The Met Office. 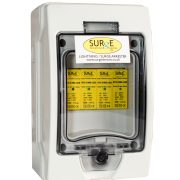 This is a question that will crop up quite a lot this year, especially as Surge Protection gains popularity through the 18th edition of the wiring regulations. We have been asked time and time again over the years about whether contractors are allowed to install our Surge Protection Device into a traditional manufacturers mains unit. We hope this short blog article will clear things up for you.

Most consumer unit manufacturers, quite rightly, won’t guarantee their boards if another manufacturers MCB’s or RCBO’s are fitted inside it. This is generally because the MCB’s are specifically designed to align with their own unique busbar systems and a badly fitting MCB might create a hot spot with a poorly aligned busbar connection.

However, a free standing din-rail mounted device, such as a surge arrester or timer etc. is not connected to the busbar system, it is only wired by the installer with cables, therefore such problems can’t exist.